CoreLogic released their Home Price Index report for July, showing that home prices declined by 0.3% from June but were 15.8% higher when compared to July of last year. This annual reading declined from 18.3% in June but is still significant. More importantly, CoreLogic forecasts that home prices will appreciate 0.3% from July to August and 3.8% in the year going forward.

What’s the bottom line? Remember that 4% appreciation can still be meaningful for wealth creation. For example, if someone bought a $400,000 home and put 10% down, that means they would gain $16,000 in appreciation over the next year and earn a 40% return on their investment due to leverage. 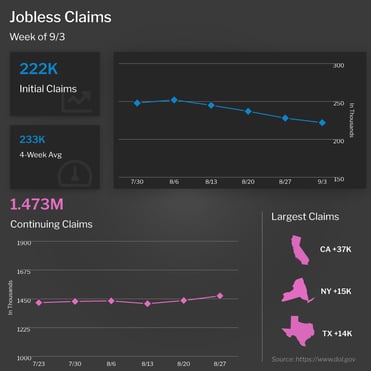 The number of people filing for unemployment benefits fell by 6,000 in the latest week, as 222,000 Initial Jobless Claims were reported, which is the lowest level in just over three months. The previous week’s Initial Jobless Claims were also revised lower by 4,000. However Continuing Claims, which measure people who continue to receive benefits after their initial claim is filed, increased by 36,000 to 1.473 million, the highest level since April.

What’s the bottom line? The 4-week average of Initial Jobless Claims had been rising steadily this spring and summer after reaching 170,500 on April 2. However, it has moderated slightly in recent weeks and now sits at 233,000 after the high of 249,500 on August 6. It appears that layoffs and in turn Initial Claims have slowed in recent weeks, but those who have already been laid off are continuing to receive benefits. This could be a sign that employers are reluctant to let go of workers for fear of not being able to replace them and may be slowing new hires instead.

In an appearance last Thursday, Fed Chair Jerome Powell reiterated that the Fed is “strongly committed” to fight inflation, which remains near 40-year highs and well above their target range.

To help cool inflation, the Fed has been hiking its benchmark Fed Funds Rate, which is the interest rate for overnight borrowing for banks and it is not the same as mortgage rates. So far this year, we have seen 25, 50, 75 and 75 basis point hikes at the Fed’s March, May, June and July meetings, respectively. Recent news reports have also indicated that the Fed is expected to hike the Fed Funds Rate another 75 basis points at its meeting on September 20-21.

What’s the bottom line? Inflation is one of the main drivers of interest rates so, counterintuitively, Fed rate hikes can be good for mortgage rates if they’re perceived to curb inflation. However, the Mortgage Bond market reacted negatively last Thursday to Powell’s comments, which can come as a surprise.

If the Fed sounds too worried that they are so far behind the curve fighting inflation, it can scare the markets. On the other hand, if the Fed sounds confident that they have the job in hand and inflation under control, the markets respond well as they can look forward to lower inflation. Last Thursday, we saw the former reaction.

However, there are some reasons to believe inflation will move lower later this year, especially if the Fed’s rate hikes take hold on the economy. First, goods account for 40% of the Consumer Price Index and we have seen a big decline in many commodity prices from their peak, including lumber down 66%, wheat down 44% and copper down 30%.

In addition, inflation is calculated on a rolling 12-month basis, which means that the total of the past 12 monthly inflation readings will give us the year over year rate of inflation. For example, when the data for August 2022 is released this week, it will replace the data for August 2021 in the calculation of annual inflation. Inflation readings after September of last year are higher comparisons, so if we see lower monthly readings this fall, the annual rate of inflation could then move lower.