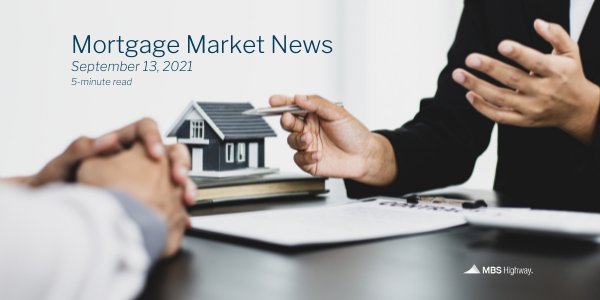 Wholesale inflation set a new record high while home price appreciation also remains red hot. Over in the labor sector, Initial Jobless Claims reached their lowest level since the start of the pandemic.

The Producer Price Index (PPI), which measures inflation on the wholesale level, rose 0.7% in August and 8.3% on a year over year basis. The annual reading was up from 7.8% in July and is a new record high.

Core PPI, which strips out volatile food and energy prices, rose 0.6% in August and 6.7% on a year over year basis. This was hotter than expectations and up from 6.6% in July.

Though many factors influence the markets, inflation – and whether it continues to rise –remains crucial to monitor in the months ahead.

The Fed continues to stand by their position that the increase we have seen in inflation is transitory. However, we have seen wages continue to rise as well, which is typically stickier inflation. The Atlanta Fed’s Wage Growth Tracker, which has been lagging other reports regarding wage growth, showed a 3.9% annual increase in August. This matches the quickest pace of wage gains since 2008.

The increase in wages and inflation are going to be components the Fed has to keep in mind when deciding when to taper their purchases of Mortgage Backed Securities and Treasures, which have been ongoing to help stabilize the markets. The weak August Jobs Report and the Delta variant could also impact the Fed’s timing, possibly leading to a delay.

CoreLogic released their Home Price Index report for July, showing that home prices rose by 1.8% from June and 18% year over year, which is an increase from the 17.2% annual gain reported in June.

A key reason for the rise in home prices has been the ongoing dynamic of low supply and high demand for homes around the country. There was some good news related to this in the recent Jobs Report for August from the Bureau of Labor Statistics. Residential construction employment grew by 17,400 in August, which will likely help builders tackle their current backlogs of orders and may help the supply of new homes, which is desperately needed. Residential building employment is now up 5% above pre-pandemic levels.

CoreLogic forecasts that home prices will rise 0.7% in August and 2.7% in the year going forward. But remember they remain conservative in their forecasting and continue to miss on the low side. For example, CoreLogic had forecasted prices for July would only rise by 0.7% and prices ended up increasing by 1.8%. On an annual basis, they are forecasting that prices will rise 2.7%, which is lower than their 3.2% annual forecast in June and lower than most other forecasts that have been made. 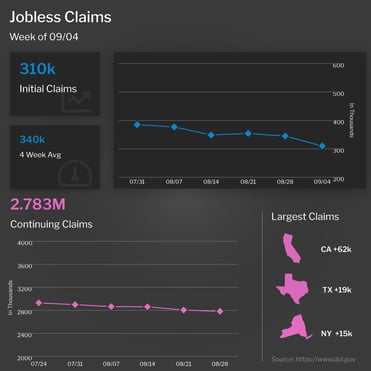 The number of people filing for unemployment benefits for the first time fell 35,000 in the latest week, as Initial Jobless Claims were reported at 310,000. This is the lowest level of first-time filers since the pandemic began. California (+62K), Texas (+19K) and New York (+15K) reported the largest number of claims.

Continuing Claims also fell 22,000 to 2.8 million. This brought the number of people continuing to receive regular benefits to a new Covid-era low after the upward revision to the previous report.

The number of people receiving the extended $300 benefits increased nearly 200,000. However, Pandemic Unemployment Assistance Claims (which provide benefits to people who would not usually qualify) and Pandemic Emergency Claims (which extend benefits after regular benefits expire) fell by a combined 315,000.

Note that while the extended and pandemic benefits expired on Labor Day, the metrics within the Jobless Claims report are delayed, meaning we won’t see the impact of this expiration until we see the report in two weeks.

As of the latest reporting, 11.9 million people are still receiving benefits throughout all programs, which is 256,000 less than the previous report.

On a related note, the JOLTS (Job Openings and Labor Turnover Survey) showed that there were almost 11 million job openings in July. It will be important to see if the start of the school year and the end of extended and pandemic benefits will result in some of these positions being filled. It’s estimated that 7.5 million people have lost all their unemployment benefits, while another 3 million will no longer receive the extra $300 due to the expiration of these programs.

The lack of workers almost certainly played a role in the disappointing August Jobs Report from the Bureau of Labor Statistics, with just 235,000 new jobs reported – far below the 750,000 expected. In addition to the 11 million job openings reported via JOLTS, the National Federation of Independent Business recently reported that plans to hire and positions not able to fill both hit a 48-year record. Compensation was also at a 48-year high, as business are trying to attract workers.

There were plenty of fireworks ahead of the Independence Day holiday, as key labor and housing...