Rents on the Rise

The economic calendar was relatively quiet, but news on consumer inflation, housing, jobless claims and retail sales made headlines.

Moderating Inflation Start of a Trend?

The Consumer Price Index (CPI), which measures inflation on the consumer level, rose by 0.3% in August and was in line with expectations. The year over year reading moderated slightly from 5.4% to 5.3%.

Core CPI, which strips out volatile food and energy prices, rose by 0.1%, though this was lower than expectations. On a year over year basis, Core CPI decreased from 4.3% to 4%.

Within the report, rents rose 0.3% in August and 2.1% on a year over year basis. However, the CPI report is not capturing the increases we are seeing in rents that are being reported elsewhere showing around 2% increases in August and up double digit increases year over year, such as the data from Zillow below. We may see some catch up in this CPI data in future months but for now the reporting is being dragged down by their methodology.

One of the main questions about the August CPI numbers is whether this slight moderation in inflation is a sign that inflation will continue to fall in the months ahead?

However, the next several readings from 2020 were much lower, so if we continue to see monthly increases going forward this fall, the year over year CPI figures could start to accelerate again.

On a related note, the National Federation of Independent Business Small Business Optimism Index showed that companies that expect higher selling prices rose 3 points to 49%, which is a 41-year high. This points to continued inflation from small businesses.

Rents on the Rise

Zillow released their Rental Index report, showing that rents rose 1.7% in August and 11.5% year over year. Zillow also said that home prices rose 1.8% in August and 17.7% from the same time last year. They forecast that home values will grow nearly 12% over the next 12 months, which is very strong.

Zillow also reported that although inventory is trending higher month over month, it is still down 23% from August of last year.

While some pundits have predicted that a lot of inventory will hit the market due to homes leaving forbearance this fall, it’s important to really analyze the numbers.

Initially about 5 million entered forbearance and of those who exited thus far:

Currently, there are around 1.5 million still in forbearance. If the above numbers continued, this would mean that only around 2,400 homes would go into some type of short sale or foreclosure. Given the record low inventory of homes currently on the market, this amount would be easily absorbed without having much of an impact on rising rental or home prices. 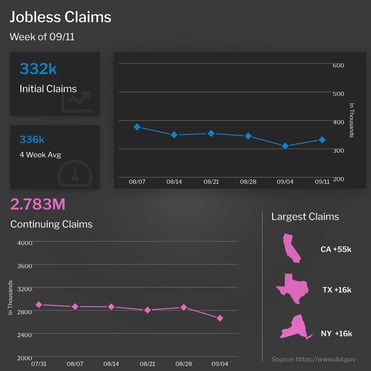 Initial Jobless Claims rose by 20,000 in the latest week, as the number of people filing for unemployment benefits for the first time was reported at 332,000. While this was a move in the wrong direction, claims are getting closer to pre-pandemic levels of 180,000 to 200,000 new claims each week.

The number of people receiving the extended $300 benefits decreased by 212,000. However, Pandemic Unemployment Assistance Claims (which provide benefits to people who would not usually qualify) and Pandemic Emergency Claims (which extend benefits after regular benefits expire), rose by a combined 397,000.

As of this latest report, 12 million people are still receiving benefits throughout all programs, which is up 179,000 from the previous report. Remember that although the extra and pandemic-specific benefits expired on Labor Day, the metrics within this report are delayed by one to three weeks, so we won’t see the impact of the expiration for a few weeks.

Shoppers were out in droves last month as Retail Sales were much stronger than anticipated, rising 0.7% from July to August versus the expected 0.8% decrease. When stripping out car sales, which have been hindered by the ongoing chip shortage, sales rose 1.8%. However, sales in July were revised lower from a loss of 1.1% to a loss of 1.8%.

Lastly, there was positive news from the manufacturing sector, as regional reports for both New York and Philadelphia beat expectations in September. It will be important to see if these reports signal continued expansion or if ongoing supply chain issues will remain a headwind.

The housing sector remains the backbone of our economic recovery, as the demand for homes has...