Despite slowing activity in the housing market, supply still remains tight. Plus, the Fed’s latest rate hike caused volatility in the markets. Here’s what you need to know:

As expected, the Fed hiked its benchmark Fed Funds Rate by an aggressive 75 basis points at its meeting last Wednesday. This follows the 25, 50, 75 and 75 basis point hikes the Fed previously made at their March, May, June and July meetings, respectively.

The Fed Funds Rate is the interest rate for overnight borrowing for banks and it is not the same as mortgage rates. The main tool the Fed uses to curb inflation is hiking its benchmark Fed Funds Rate. During his press conference, Fed Chair Jerome Powell reiterated that the Fed is “strongly committed” to fight inflation, which remains near 40-year highs and well above their 2% target.

What’s the bottom line? The Fed now expects an additional 125 basis points of hikes this year, which may be 75 basis points at their November 2 meeting and 50 basis points at their December 14 meeting. In addition, the Fed anticipates inflation as measured by Core Personal Consumption Expenditures to be at 4.5% at the end of 2022, which is not a lot of progress from current levels towards their goal of 2%.

The Bond market digested the Fed’s projections negatively, as they gave the impression that the Fed does not have a handle on inflation, which the Bond market hates. It will be important to see if the Fed can convince investors and the markets that they have a handle on inflation, as this will play a crucial role in the direction of Mortgage Bonds and mortgage rates this fall.

Powell was also asked whether the Fed could still achieve a “soft landing,” which means they can slowdown or tighten the economy in their attempt to bring inflation under control while avoiding a recession. He replied, “The chances of a soft landing are likely to diminish to the extent that policy needs to be more restrictive, or restrictive for longer. Nonetheless, we're committed to getting inflation back down to 2%.”

There is growing consensus for a recession, including Goldman Sachs and Fannie Mae who think that there will in fact be a hard landing and a recession early next year. The World Bank and FedEx CEO Raj Subramaniam also made headlines recently by saying they believe the world is edging toward a global recession. 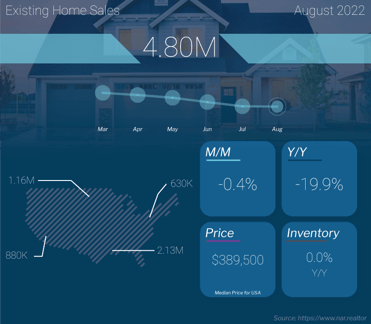 Existing Home Sales fell 0.4% from July to August to a 4.8 million unit annualized pace, per the National Association of Realtors (NAR). This was stronger than expectations of a 2.5% decline. Sales were also down 19.9% when compared to August of last year. This is a critical report for taking the pulse of the housing market, as it measures closings on existing homes, which represent around 90% of the market.

What’s the bottom line? Activity in the housing market has certainly slowed, but home prices are still being supported by continued low inventory. Plus, the rise in inventory that occurs every summer from parents listing their homes so their kids are settled for the new school year appears to have crested.

The number of available homes fell from 1.31 million at the end of July to 1.28 million at the end of August, which equates to a 3.2 months’ supply of homes. Six months is considered a balanced market. This data speaks to the ongoing imbalance of supply and demand, which should continue to be supportive of home prices.

In addition, there were only 779,000 “active listings” in August, which means that 39% of the “inventory” in the Existing Home Sales report is under contract and not truly available. This speaks to demand, as a normal market has 25% of inventory under contract. When looking at the months’ supply of available homes for sale, it’s really 1.9 months.

And while there are reports that homes are sitting longer on the market, they are still selling quickly when priced correctly. Average days on market increased slightly from the record-low of 14 days in July to 16 days in August.

Lastly, CoreLogic’s Single-family Rent Report showed that single-family rent prices remained elevated in July, up 12.6% from a year earlier. This is a slight moderation from the 13.4% annual gain seen in June. These increases in rental prices should continue to push people to see the opportunity in housing, which again will be supportive of home prices. 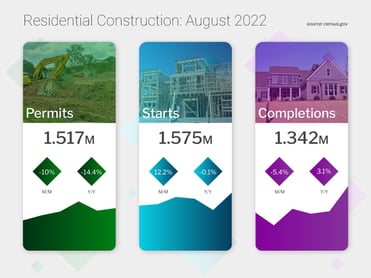 August brought a surprising increase in home construction as Housing Starts, which measure the start of construction on homes, were up 12.2% from July. While the largest increase was in multi-family units, starts for single-family homes were also up 3.4% from July. When compared to August of last year, Housing Starts were essentially flat but single-family starts were 14.6% lower this year. This is a disappointment because single-family homes are in such high demand among buyers and speaks to ongoing tight supply.

Building Permits, which are indicative of future supply, declined 10% from July to August and they were also 14.4% lower when compared to August of last year. Permits for single-family homes fell 3.5% for the month and 15.3% year over year.

Housing Completions fell 5.4% from July to a 1.342 million unit annualized pace. With household formations trending between 1.6 million and 1.7 million annualized, completions are not keeping pace.

What’s the bottom line? While interest rates are higher and demand is lower, supply still remains tight. The slowing new construction and low supply may hurt economic activity, but from a home price standpoint it will be somewhat supportive. This is very different from the housing bubble, where demand was waning but supply of new homes was significantly increasing.

The National Association of Home Builders (NAHB) Housing Market Index, which is a near real-time read on builder confidence, fell 3 points to 46 in September, marking the ninth straight monthly decline. All components of the index also declined, with current sales conditions falling three points to 54, sales expectations for the next six months dropping one point to 46 and buyer traffic also declining one point to 31.

What’s the bottom line? Any reading above 50 on this index, which runs from 0 to 100, signals expansion while readings below 50 signal contraction. August and September were the first time the index dropped below 50 since May 2020. The decline in all of these readings shows that builders are anticipating a further slowdown.

NAHB chief economist Robert Dietz noted that incentives appear to be back as more than half of the builders surveyed used incentives to bolster sales, including mortgage rate buydowns, free amenities and price reductions. In addition, roughly 24% of builders reported reducing home prices, which is up from 19% in August. 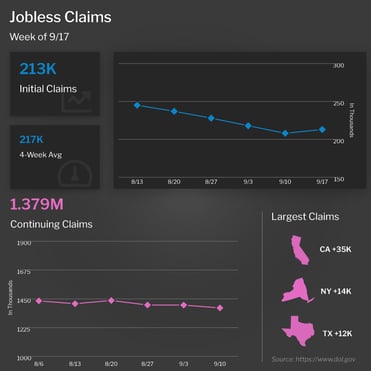 The number of people filing for unemployment benefits for the first time rose by 5,000 in the latest week, as 213,000 Initial Jobless Claims were reported. However, the previous week’s Initial Jobless Claims were revised lower by 5,000. Continuing Claims, which measure people who continue to receive benefits after their initial claim is filed, decreased by 22,000 to 1.379 million.

What’s the bottom line? Layoffs and in turn Initial Claims appear to have slowed in recent weeks, showing that the labor market remains tight and we’re still waiting for that recession-indicating sustained uptick in filings for unemployment.