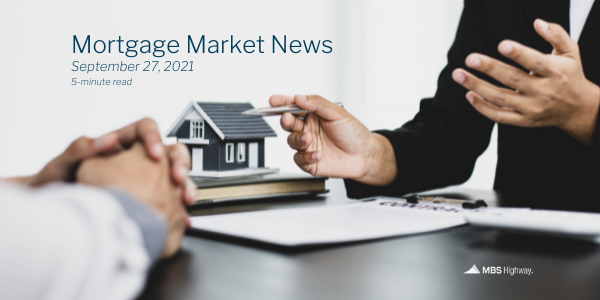 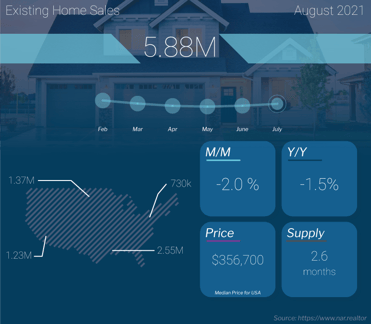 Existing Home Sales, which measure closings on existing homes, fell 2% from July to August, reaching an annual pace of 5.88 million units. Sales were 15% lower when compared to August of last year. Sales of single-family homes were also down 2% on a monthly basis, but they were only 3% below the same time last year. Note that the annual comparisons are tough based on the dynamic of the pandemic last year.

Much-needed inventory also ticked 1.5% lower in August to 1.29 million homes for sale. Inventory is down 13% year over year.

The median home price was reported at $356,700. While this is up 15% from August of last year, it is cooler than the 18% annual increase reported for July and 24% for June. Note that the median home price is not the same as appreciation. It simply means half the homes sold were above that price and half were below it.

First-time homebuyers accounted for 29% of sales, a notch lower than the 30% seen in July. Cash buyers remained stable at 22%, but this figure is still up big from 16% last August. Investors purchased 15% of homes, which was stable from the previous month.

What do these figures suggest? Investors may be crowding out first-time homebuyers, as they are likely purchasing lower-priced homes that they can rent out. 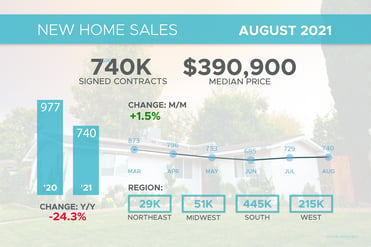 New Home Sales, which measure signed contracts on new homes, came in stronger than expectations, rising 1.5% from July to August. There were also positive revisions to July’s data, which means the gain is really like a 4.5% rise month over month.

New Home Sales are at a 740,000 annualized pace, which is down on a year over year basis by 24%, but off tough comparisons.

Looking at inventory levels, there were 378,000 new homes for sale at the end of August. While this is up 1.5% from July, it is down 24% when compared to August of last year.

The median home price was reported at $391,000, which is 20% higher year over year. Again, this means that half the homes sold were above this level and half below it. This figure is not the same as appreciation. 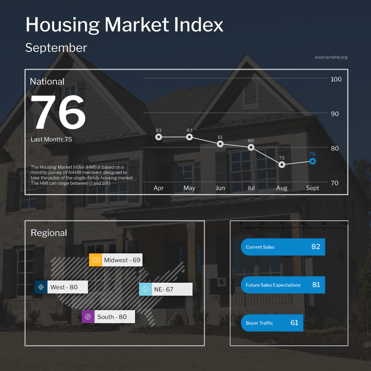 The National Association of Home Builders Housing Market Index, which is a real-time read on builder confidence, came in above expectations, rising one point to 76 in September.

Looking at the components of the index, current sales conditions rose 1 point to 82, sales expectations for the next six months were unchanged at 81, and buyer traffic rose 2 points to 61.

Any reading over 50 on this index, which runs from 0 to 100, signals expansion. The drop in lumber prices and stabilization of other prices contributed to the increase in confidence. However, delivery times for new homes still remain extended due to ongoing supply chain issues. Labor shortages are also expected to persist.

D.R. Horton, America’s largest homebuilder, said that it “expects its homes closed for the fourth quarter of fiscal 2021 to be in a range of 21,300 homes to 21,700 homes compared to the previous range of 23,000 homes to 24,500 homes, due to continuing significant disruptions in the supply chain, including shortages and delivery delays in certain building materials along with tightness in the labor market.”

In other words, they are expecting to complete 10% less homes than previously forecast, which speaks to supply remaining tight. 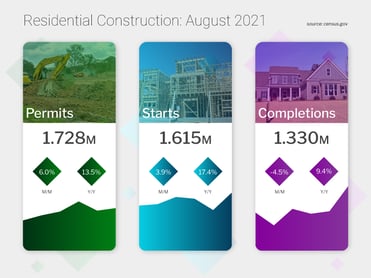 Housing Starts, which measure the start of construction on homes, rose 4% in August at an annualized pace of 1.6 million homes. This is 17.4% higher than August of last year. However, starts for single-family homes, which are the most crucial, fell nearly 3% at a 1.1 million pace.

Building Permits, which are a good forward-looking indicator of construction, rose 6% in August and 13.5% year over year. Single-family Permits did tick higher, but only by 0.6%.

Housing Completions, which speak to delivery times being delayed, were down 4.5% in August, though completions on single-family homes rose nearly 3%. However, the number of single-family houses permitted but not even started yet is up 50% from last year.

So, what is the data telling us?

Overall Housing Starts were higher in August but starts for single-family homes fell, while single-family permits were essentially flat. Builders are having a difficult time completing homes, which shows that the supply issues we are facing are going to continue. With demand remaining strong, all of these factors point to the likelihood that homes will continue to appreciate. 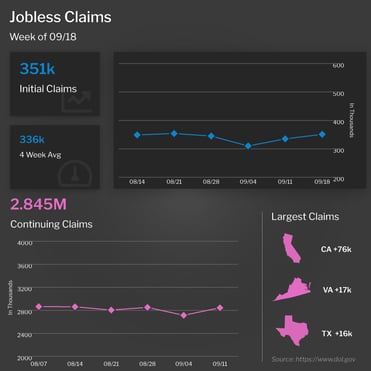 The number of people filing for unemployment for the first time rose by 16,000 in the latest week, as Initial Jobless Claims were reported at 351,000. Continuing Claims, which measure people who continue to receive regular benefits, also increased by 131,000 to 2.85 million, bouncing off pandemic-era lows.

While these figures moved in the wrong direction, the big story is that the COVID-enacted plans saw significant improvements. Pandemic Unemployment Assistance Claims (which provide benefits to people who would not usually qualify) and Pandemic Emergency Claims (which extend benefits after regular benefits expire) fell by a combined 752,000.

As of the latest reporting, 11 million people are still receiving benefits throughout all programs, which is down 856,000 from the previous report.

Is a November Taper Announcement Ahead?

Last week’s Fed meeting was especially significant, as they have been under a lot of pressure to reduce their monthly purchases of Treasuries ($80 billion/month) and Mortgage-Backed Securities ($40 billion/month) that were enacted to keep rates low and aid the recovery.

The Fed has said they want to wait before tapering, or reducing, their purchases until inflation reaches their goal of 2% and there is “substantial further progress” towards maximum employment.

The Fed has previously said that its target for inflation (which is currently reported at between 4.2% to 5.3% depending on if you are looking at Personal Consumption Expenditures or the Consumer Price Index) has clearly already been met.

The Fed did not make any announcement regarding tapering at last week’s meeting, saying in their Monetary Policy Statement, “If progress continues broadly as expected, the committee judges that a moderation in the pace of asset purchases may soon be warranted.”

Yet, in his press conference following the meeting, Fed Chair Jerome Powell said that he felt that the Fed’s goal of maximum employment is all but met and that he doesn’t need to see an extremely strong jobs report for September (which will be released October 8) to taper. This likely means that, barring any huge economic developments, the Fed will likely announce tapering at their November 3 meeting and may begin reducing their purchases in December, before the end of the year.

Once the Fed begins tapering, they are expected to reduce their purchases by $15 billion per month. This would mean that if they began tapering in December, they would be done with their purchases by the end of June 2022. But in that time period, they would still buy an additional $660 billion in Bonds, which is $60 billion more than they bought during all of the QE2 program they used to help us get out of the 2007 to 2008 recession.

In other words, the Fed’s policy should remain very accommodative for a long period of time.

Regarding inflation, the Fed affirmed their continued stance that much of the increase we have seen is “transitory” due to temporary bottlenecks in supply chains. The Fed has been increasing their inflation expectations throughout this year, but they expect inflation to drop to 2.2% next year.

While some of the increase in inflation may be due to these transitory factors, we have also seen wage-pressured inflation, which tends to be stickier. In addition, there is anecdotal evidence from companies that supply chain issues may not be cleared up by next year, especially when it comes to shipping costs.

CoreLogic released their second quarter Equity Report, showing that equity has increased almost 30% from last year. Negative equity homes decreased by 12% from the first to second quarter and 30% year over year. This equates to only 2.3% of all mortgaged properties.