Home Sales, Appreciation on the Rise 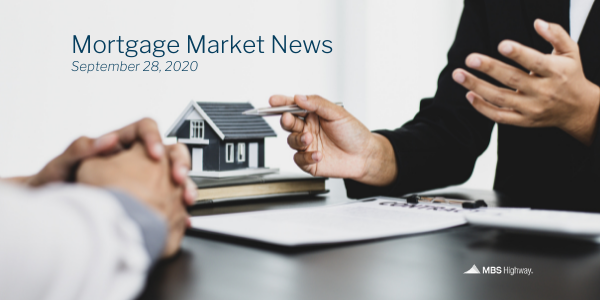 Initial Jobless Claims ticked up slightly during the week ending September 19, while the housing sector continues to be a bright spot in the economy, with sales of existing and new homes increasing in August and home prices continuing to appreciate.

Labor Sector Has a Long Way to Go 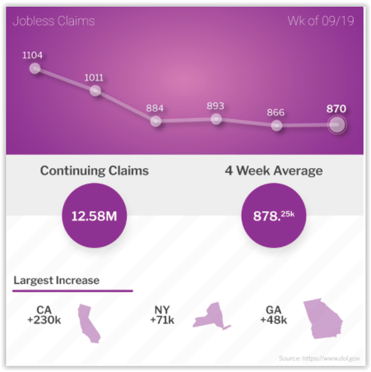 Another 870,000 people filed for unemployment benefits for the first during the week ending September 19. California (+230K), New York (+71K) and Georgia (+48K) reported the largest increase. The number of people continuing to receive benefits remains at a staggering 12.6 million.

All in all, 26 million people are receiving some type of unemployment benefits. While this total improved significantly by 3.7 million people, the bottom line is that there is a long way to go before unemployment returns to pre-pandemic levels.

Sales of existing homes were up 2.4% from July to August, marking three consecutive months of sales gains. And because these are closings, the data likely represents buyers shopping for homes in June and July. Sales were also 10.5% higher when compared to August of last year, which is the highest pace since 2006 when there were twice as many homes for sale.

Inventory remains tight, with only 1.49 million units for sale at the end of August, down nearly 19% from the same time last year. This marks just a 3-month supply of homes available for sale, where 6 months is considered normal.

The median home price was reported at $310,600, up 11.4% year over year. This doesn’t mean homes are not affordable, it just means that half the homes sold below and half above this price. First time home buyers made up 33% of home sales, down from 34%, but still strong.

"Home sales continue to amaze, and there are plenty of buyers in the pipeline ready to enter the market," said Lawrence Yun, NAR’s chief economist. "Further gains in sales are likely for the remainder of the year, with mortgage rates hovering around 3% and with continued job recovery." 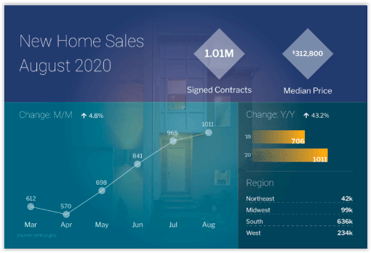 New Home Sales, which measures signed contracts on new homes, were up 4.8% in August, which was much stronger than the small decline expected. Sales are now on a pace above 1 million for the year and are now up a whopping 43% year over year.

The median new home price decreased 3% year over year to $312,800. Note that this number is not the same as home values and does not mean home prices went down. As with Existing Home Sales, this figure reflects the fact that half the homes sold above and half below this price. In other words, more lower priced homes sold in August which makes sense, as builders have been trying to put up more affordable homes for first time home buyers.

Inventory of new homes also remains very tight, with only 282,000 homes for sale at the end of August. This equals just a 3.3-month supply of homes available for sale. Again, a 6 months' supply is considered normal.

The FHFA (Federal Housing Finance Agency) released their latest House Price Index, which measures home price appreciation on single-family homes with conforming loan amounts. Home prices rose 1% in July and are up 6.5% year over year, which is even stronger than the 5.8% annual increase in the previous report and the 4.9% increase seen two months ago. This report is further evidence that the housing sector remains the bright spot in our economy.

A Note on Freight Shipping … and Inflation

The Cass Freight Index, which measures freight shipments, showed that shipments fell -7.6% year over year in August, which was an improvement from the -13.1% last month. Month over month the index was up 8.0%.

Cass Freight said, “This supports what we have heard from public carriers across all modes, and we believe the trend of 'better' has continued here in September. Expect the Cass Index to move back closer to year-ago levels in the coming months, although we think it will stay in negative territory until 2021." They added, "Still, all signs point to an improving economy, and goods movement is getting better every month."

This rebuild and need for shipping items across the world is also reflected in sharply higher shipping rates across all modes. Truckstop.com said in a report that trucking spot rates are up 19% year over year. Cargo rates via ship are also up sharply and we know FedEx and UPS are implementing surcharges. 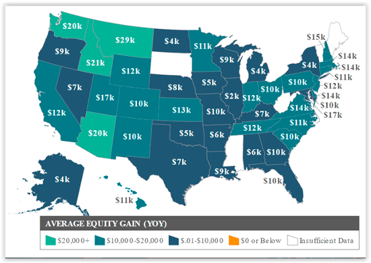 In another sign of strength from the housing market, research firm CoreLogic released their Homeowner Equity report showing homeowners with mortgages, which makes up roughly 63% of all properties, saw their equity increase by 6.6% year over year. Homeowners gained approximately $9,800 in equity during the past year.

Lastly, Durable Goods Orders, which reflects new orders placed with domestic manufacturers for delivery of factory hard goods, increased by 0.4% in August. While this was a slight miss due to volatile aircraft orders, Core shipments (which are plugged into GDP) rose1.5% month over month. This was about twice the level expected and should result in an uplift in GDP estimates for the third quarter. In addition, inventories fell for a third month, which supports the possibility that demand will come back before supply and can contribute to inflation.