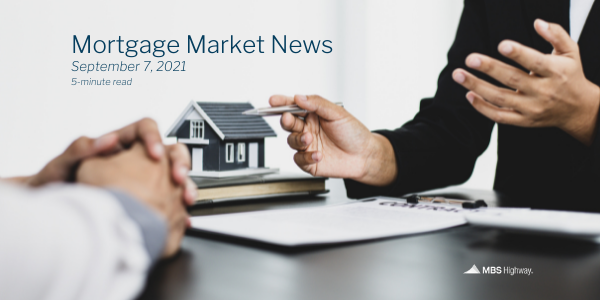 August brought disappointing news from the labor sector, as job growth was much lower than expected. Meanwhile, home price appreciation continues at a record setting pace.

It’s important to understand that there are two reports within the Jobs Report and there is a fundamental difference between them. The Business Survey is where the headline job number comes from and it's based predominately on modeling.

The Household Survey, where the Unemployment Rate comes from, is done by actual phone calls to 60,000 homes. The Household Survey also has a job loss or creation component, and it showed there were 509,000 job creations, while the labor force increased by 190,000. The number of unemployed people decreased by 318,000, causing the Unemployment Rate to fall from 5.4% to 5.2%.

However, the true Unemployment Rate is higher than the headline figure. There is an ongoing misclassification error where people were classified absent from work for other reasons and not marked as unemployed on temporary layoff when they should have been. When we factor this into the calculations, the Unemployment Rate should have been around 0.3% higher, putting it closer to 5.5%.

In addition, there are 5.7 million people who have not looked for work in the last four weeks who are also not counted in the labor force or counted as unemployed. With extra benefits now expiring, some of these individuals are going to start looking for work again and will be counted in the calculations. This could actually cause the Unemployment Rate to move higher in the coming months until they find employment.

Wages were also on the rise. Average hourly earnings were up 0.6% from July to August and they also rose 4.3% year over year. Average weekly earnings, which we focus on more because it measures what people actually take home, also increased 0.6% month over month. Year over year, weekly earnings rose 4.6%, but if we extrapolate the last few months on a year over year basis, the increase in weekly earnings is closer to 7%, which is more indicative of what we are seeing. 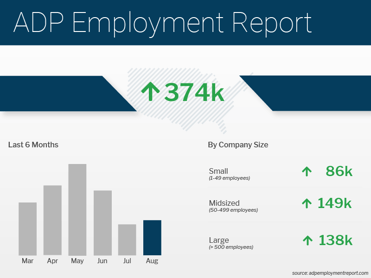 The ADP Employment Report, which measures private sector payrolls, showed that there were 374,000 jobs created in August, which was much lower than expectations of between 500,000 to 600,000 new jobs. Additionally, July’s report was revised lower by 4,000 jobs, bringing the total number of jobs created in July to 326,000.

The services sector again led the way with 329,000 job creations, with the bulk of these new jobs coming in the leisure and hospitality sector (+201,000). The goods producing sector increased by 45,000 jobs. 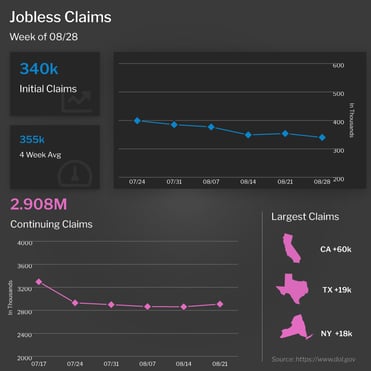 On a positive note, the number of people filing for unemployment for the first time reached a new post-pandemic low in the latest week, with Initial Jobless Claims dropping 14,000 to 340,000. California (+60K), Texas (+19K) and New York (+18K) reported the largest number of claims.

The number of people receiving extended benefits decreased by 237,000. However, Pandemic Unemployment Assistance Claims (which provide benefits to people who would not usually qualify) and Pandemic Emergency Claims (which extend benefits after regular benefits expire) rose by a combined 414,000.

All in all, 12.2 million people are still receiving benefits throughout all programs, which is up 178,000 from the previous report. Remember that extra benefits expire this week, which should cause these figures to significantly improve in the coming months. Plus, as kids across the country return to school, many parents may be able to return to the labor force.

The Case-Shiller Home Price Index, which is considered the “gold standard” for appreciation, showed home prices rose 2.2% in June and 18.6% year over year. This annual reading set a record and is also almost 2% higher than the annual price gains seen in May. 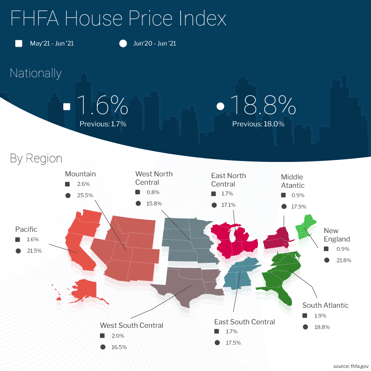 The Federal Housing Finance Agency (FHFA) also released their House Price Index, which measures home price appreciation on single-family homes with conforming loan amounts. While you can have a million-dollar home with a conforming loan amount, the report most likely represents lower-priced homes, where supply is tightest and demand is strongest.

Home price rose 1.6% in June and they were up 18.8% year over year, which is even higher than the 18% annual appreciation reported for May.

Rents are also rising at a feverish pace. Apartment List reported that rents rose 2.1% in August and 13.8% year to date.

This is the fastest rent growth on record and is on a 20% pace if these increases continue.

Pending Home Sales, which measure signed contracts on existing homes, decreased by 1.8% in July, the National Association of Realtors (NAR) reported. This was slightly worse than expectations looking for a small gain. Contracts were also 8.5% lower on an annual basis.

NAR’s chief economist, Lawrence Yun, said that, "The market may be starting to cool slightly, but at the moment there is not enough supply to match the demand from would-be buyers." However, he added that “inventory is slowly increasing and home shoppers should begin to see more options in the coming months.”

Also of note, 27% of buyers bypassed appraisal and inspection contingencies in July. This speaks to buyers hoping to accelerate the homebuying process, Yun explained.

July was a strong month for job growth, though private sector payrolls did come in beneath...