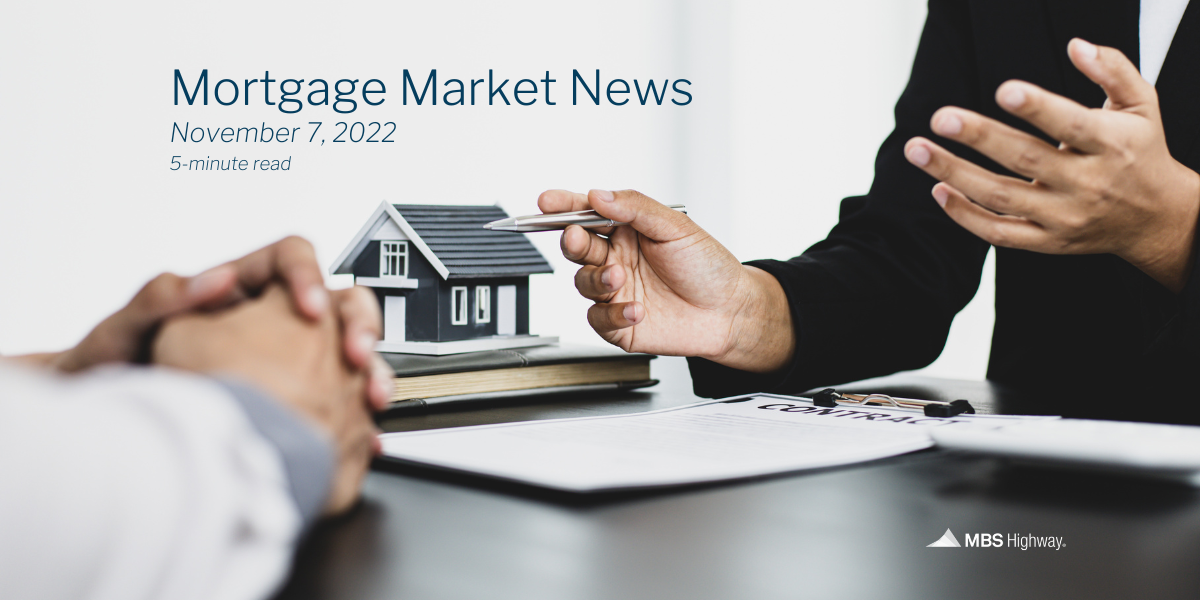 Even though the Fed hiked rates as expected, the markets were volatile after comments from Fed Chair Jerome Powell. In the labor sector, there was more to job growth in October than the headlines suggested.

As expected, the Fed hiked its benchmark Fed Funds Rate by an aggressive 75 basis points at its meeting last Wednesday, marking its sixth rate hike of the year and fourth consecutive 0.75% increase.

The Fed Funds Rate is the interest rate for overnight borrowing for banks and it is not the same as mortgage rates. When the Fed hikes the Fed Funds Rate, they are trying to slow the economy and curb inflation. During his press conference, Fed Chair Jerome Powell reiterated that the Fed is “strongly committed” to fight inflation, which remains near 40-year highs and well above their 2% target.

What’s the bottom line? The Fed’s Monetary Policy Statement suggested they may adjust their approach to curbing inflation, noting they “will take into account the cumulative tightening of monetary policy, the lags with which monetary policy affects economic activity and inflation, and economic and financial developments.”

Stocks and Bonds initially rallied after the statement was released, as investors were hoping this was a sign that the Fed understood the lag time it takes for rate hikes to impact the economy and may pause them soon. However, the markets sold off sharply during Powell’s press conference, once he made it clear that a pause to the Fed’s rate hikes is not coming in the near future. Powell also said he would rather risk overdoing it and hiking too much instead of underdoing it, as the Fed can always cut rates in the future.

Headline Jobs Number Not What It Seems 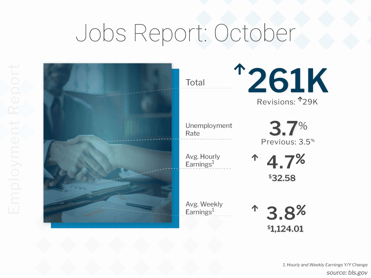 The Bureau of Labor Statistics (BLS) reported that there were 261,000 jobs created in October. While this was above expectations of 200,000 new jobs, it was the smallest monthly gain so far this year. There were also positive revisions to the data from August and September, adding 29,000 jobs in those months combined.

What’s the bottom line? While the headline job growth number appears strong, this figure is not what it seems.

There are two reports within the Jobs Report and there is a fundamental difference between them. The Business Survey is where the headline job number comes from and it's based predominately on modeling. Almost 500,000 job creations came from the birth/death ratio, which uses modeling around the creation and death of businesses. This can be quite volatile and miss the mark.

The Household Survey, where the Unemployment Rate comes from, is done by actual phone calls to 60,000 homes. The Household Survey also has a job loss or creation component, and it showed there were 328,000 job losses, while the labor force decreased by 22,000. Because the job losses far outweighed those leaving the labor force, the unemployment rate increased 0.2%. In addition, most of these job losses came from your typical higher wage earners in the 45 to 54 age group.

Also of note, average hourly earnings rose 4.7% year over year, which is the lowest level in quite some time and shows less wage-pressured inflation.

Private Sector Payrolls Beat Expectations, But Hiring “Not Broad Based” 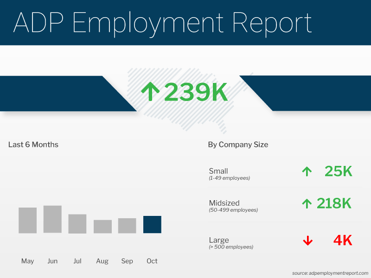 The ADP Employment Report, which measures private sector payrolls, showed that there were 239,000 jobs created in October. Although this was stronger than analysts had expected, job growth for September was revised lower from 208,000 to 192,000 new jobs, which tempered some of the optimism.

ADP also reported that annual pay for job stayers increased 7.7% year over year, while job changers saw an average increase of 15.2%, which is down for the third consecutive month.

What’s the bottom line? Looking more closely at the numbers, the bulk of job gains were in the leisure and hospitality sector (+210,000) while most other areas saw job losses. This means the breadth of job gains was weak, especially in the goods sector, which showed losses overall. Job gains were also most prevalent in small and mid-sized companies, while large companies with 500 or more employees posted job losses.

Nela Richardson, chief economist for ADP, said, “This is a really strong number given the maturity of the economic recovery, but the hiring was not broad-based. Goods producers, which are sensitive to interest rates, are pulling back, and job changers are commanding smaller pay gains. While we're seeing early signs of Fed-driven demand destruction, it's affecting only certain sectors of the labor market.” 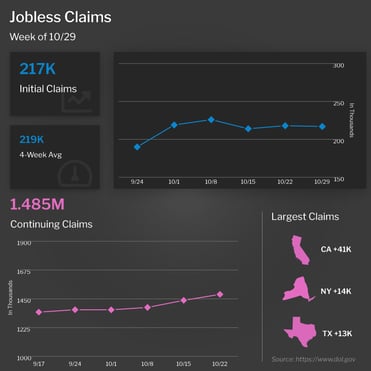 The number of people filing for unemployment benefits for the first time fell by 1,000 in the latest week, as there were 217,000 Initial Jobless Claims reported. Continuing Claims, which measure people who continue to receive benefits after their initial claim is filed, rose 47,000 to 1.485 million.

What’s the bottom line? Initial Jobless Claims remain quite low, as employers continue to hold on to workers. However, Continuing Claims have risen significantly over the past few weeks. This reflects a slower pace of hiring and could suggest that it’s becoming harder for people to find a job once they’re let go.

CoreLogic released their Home Price Index report for September, showing that home prices declined by 0.5% from August but they were 11.4% higher when compared to September of last year. This annual reading declined from 13.5% in August but is still significant. More importantly, CoreLogic forecasts that home prices will remain flat in October and rise 3.9% in the year going forward.

What’s the bottom line? CoreLogic’s latest annual forecast of 3.9% is an increase from 3.2% in the previous report, which is important because 4% appreciation can still be meaningful for wealth creation. For example, if someone bought a $400,000 home and put 10% down, that means they would gain $16,000 in appreciation over the next year and earn a 40% return on their investment due to leverage.