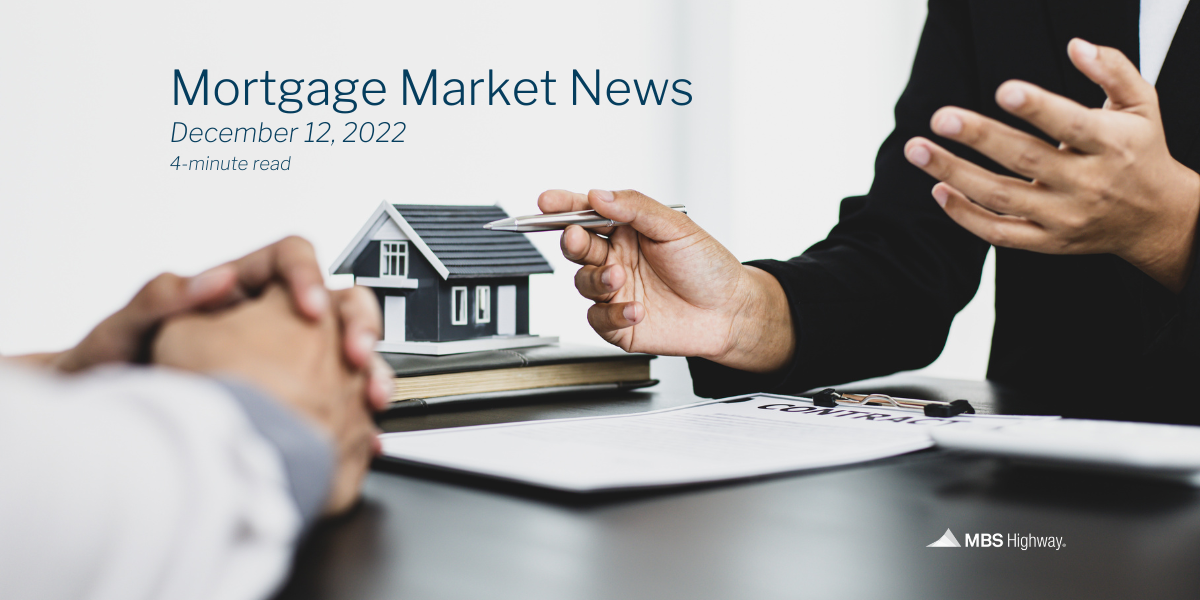 What’s the bottom line? Even though wholesale inflation was hotter than expected last month, the annual readings are still moving lower in the right direction. In addition, year-over-year consumer inflation is also expected to show a decline when November’s Consumer Price Index is reported this week, which would be good news.

CoreLogic released their Home Price Index report for October, showing that home prices declined by 0.1% from September but they were 10.1% higher when compared to October of last year. This annual reading declined from 11.4% in September but is still solid. More importantly, CoreLogic forecasts that home prices will remain flat in November and rise 4.1% in the year going forward, which is an increase from 3.9% in the previous report.

What’s the bottom line? CoreLogic’s latest annual forecast is important to note because 4% appreciation can still be meaningful for wealth creation. For example, if someone bought a $400,000 home and put 10% down, that means they would gain $16,000 in appreciation over the next year and earn a 40% return on their investment due to leverage. 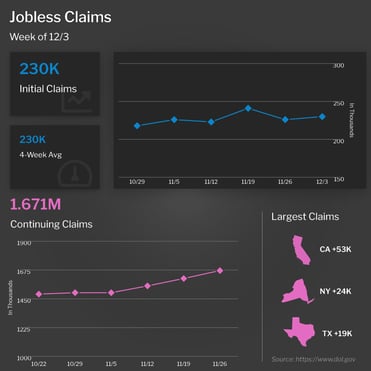 The number of people filing for unemployment benefits for the first time rose by 4,000 in the latest week, as 230,000 Initial Jobless Claims were reported. Continuing Claims, which measure people who continue to receive benefits after their initial claim is filed, saw another large increase of 62,000 to 1.671 million.

What’s the bottom line? Initial Jobless Claims represent a new crop of people filing for unemployment benefits and the data suggests it’s becoming harder for many to find a job once they’re let go. This is evidenced by Continuing Claims, which have now risen by 307,000 since the beginning of October to their highest level since February.

We are seeing more inversions on the yield curve, including 2-year yields moving higher than 10-year yields last week to reach the deepest inversion since 1981. We have also seen 3-month and 1-year yields move higher than 10-year yields. This is unusual as typically you would expect to receive a higher rate of return if you put your money away for 10 years when compared to lesser timeframes. An upside-down yield curve has been a historically accurate recession indicator, as it is a symptom that the economy is slowing.

Meanwhile, recession signals are flashing in other areas of the economy, including in the manufacturing sector. The Chicago PMI, which measures activity in that region, plummeted to 37.2 in November, below estimates and well into contraction territory which is seen when readings fall below 50.

Another sign that things are slowing has come via Business Roundtable’s fourth quarter CEO Economic Outlook Survey, which showed that hiring plans fell 17 points to 61. Business Roundtable noted that the “results reflect a softening economy that has tempered CEO plans and expectations for the next six months. The results signal CEOs remain cautious amid persistent domestic and global economic headwinds, including high inflation and the Fed measures required to tame it.”

Lastly, the Philadelphia Federal Reserve does a quarterly survey asking “professional forecasters” the probability of a recession in the next four quarters. It is now almost twice what it was prior to the Great Recession. Professional forecasters tilt to the bullish side of the optimism street. When 43% of them think a recession is likely within the next year, we should pay attention.