The Latest on Wages, Home Prices and Recession 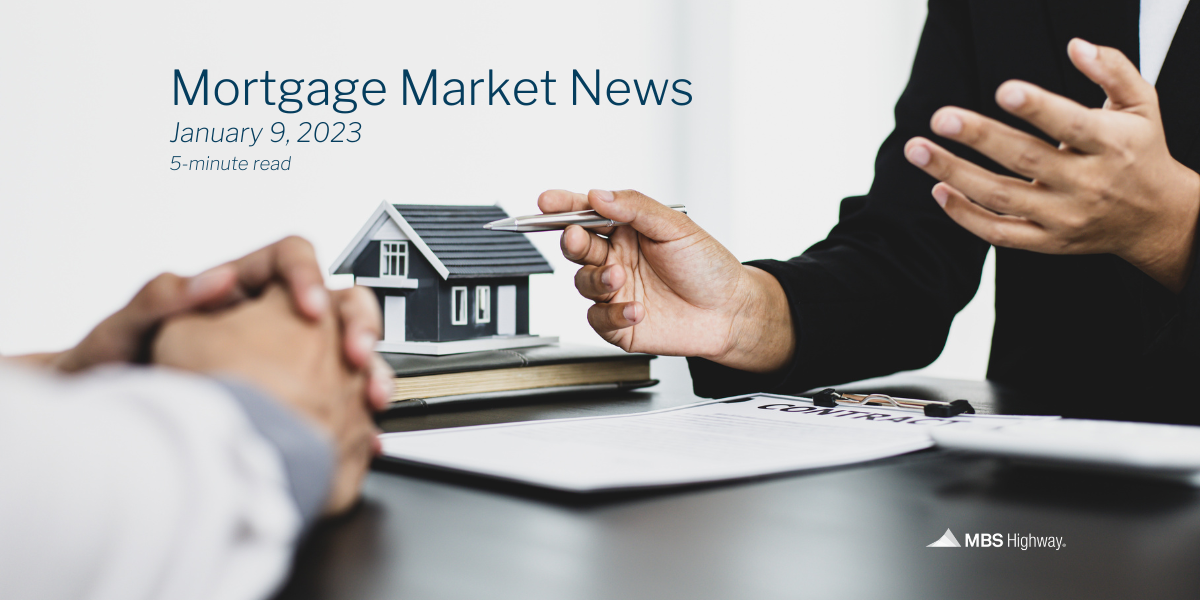 The new year kicked off with crucial labor market data, an update on home prices and a warning from the International Monetary Fund: 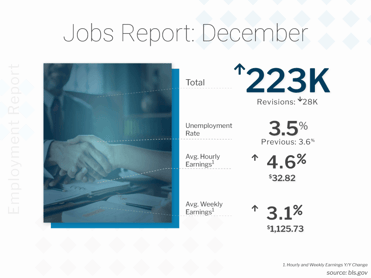 The Bureau of Labor Statistics (BLS) reported that there were 223,000 jobs created in December, which was stronger than expectations of 200,000 job gains. Revisions to the data from October and November cut 28,000 jobs in those months combined. The unemployment rate declined from 3.6% to 3.5%.

What’s the bottom line? There are two reports within the Jobs Report and there is a fundamental difference between them. The Business Survey is where the headline job number comes from and it's based predominately on modeling. The Household Survey, where the Unemployment Rate comes from, is done by actual phone calls to 60,000 homes.

The Household Survey also has a job loss or creation component, and it showed there were 717,000 job creations, which is a pretty big disparity from the headline number of 223,000 job gains. When we look deeper at the numbers, of the 717,000 job creations in the household survey, 679,000 were from part-time workers and 380,000 represent multiple job holders. This means the job creations that were reported could reflect a lot of holiday hires or people getting part-time seasonal work, making the report weaker than the headlines suggest.

In addition, average hourly earnings were up 0.3% in December and 4.6% year over year, which is down from the previous report. Average weekly earnings only rose by 0.2% last month and 3.1% year over year. Average weekly earnings measure actual take-home pay because the data factors in hours worked, which reached the lowest level since 2020. This cut in hours would actually equate to a significant number of jobs lost.

The Stock and Bond markets both reacted positively on Friday to the data on wage growth, as it reflects less wage-pressured inflation, which is what the Fed is looking for. And the Fed was certainly watching last week’s labor market data closely, as the minutes from their December meeting showed that officials are committed to maintaining a restrictive policy stance until the incoming data provides confidence that inflation is on a sustained path to 2%. Members believe that this is likely to take some time and cautioned, based upon historical experience, against prematurely loosening monetary policy. 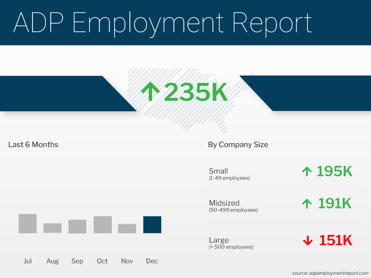 The ADP Employment Report, which measures private sector payrolls, showed that there were 235,000 jobs created in December. This was much stronger than the 150,000 job gains that were expected. While small and medium-sized businesses each added almost 200,000 jobs respectively, large companies with 500 or more employees shed 151,000 jobs.

ADP also reported that annual pay for job stayers increased 7.3% year over year, which is a decline from 7.6% in the previous report. Job changers saw an average increase of 15.2%.

What’s the bottom line? Nela Richardson, chief economist for ADP, said, “The labor market is strong but fragmented, with hiring varying sharply by industry and establishment size. Business segments that hired aggressively in the first half of 2022 have slowed hiring and in some cases cut jobs in the last month of the year.” 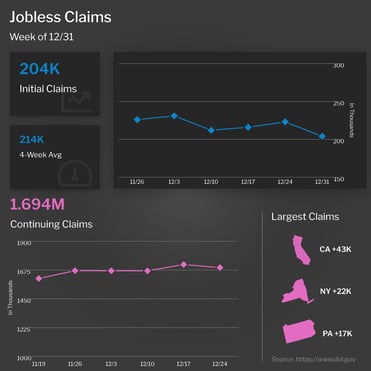 The number of people filing for unemployment benefits for the first time fell by 19,000 in the latest week, as 204,000 Initial Jobless Claims were reported. Continuing Claims, which measure people who continue to receive benefits after their initial claim is filed, declined 24,000 to 1.694 million.

What’s the bottom line? The latest Initial Jobless Claims data was for the week of Christmas, so it’s possible that the number of claims filed may have been higher if it wasn’t for the holidays. Continuing Claims measured the week before Christmas and while they declined in the latest week, they have now risen by 330,000 since the beginning of October. This is another sign of a potential slowdown in the pace of hiring, suggesting it’s becoming harder for many to find a job once they’re let go.

CoreLogic released their Home Price Index report for November, showing that home prices fell by 0.2% from October but they were 8.6% higher when compared to November of last year. This annual reading declined from 10.1% in October but is still solid. More importantly, CoreLogic forecasts that home prices will drop 0.1% in December but rise 2.8% in the year going forward.

What’s the bottom line? While CoreLogic has reported slightly negative readings month to month, they still forecast nearly 3% appreciation nationwide over the next year, which can be meaningful for wealth creation. For example, if someone bought a $400,000 home and put 10% down, they would gain $12,000 in appreciation over the next year and earn a 30% return on their investment due to leverage.

The International Monetary Fund (IMF) issued a recession warning for this year, with Managing Director Kirstalina Georgieva, saying, “We expect one third of the world economy to be in recession.” While the IMF did not include the U.S. in recession, she said that 2023 will be a "tougher" year than 2022 because “the three big economies, US, EU, China, are all slowing down simultaneously.”

Recent media headlines continue to spread fear about a pending collapse in the housing market, with...

Even though the Fed hiked rates as expected, the markets were volatile after comments from Fed...